One day it’s 70 degrees, and the next there’s freezing rain and heavy snow. February in Colorado is a strange creature. After a day of low light and cold fingers, I clomped down the stairs to the back door, Stella in tow. She stood on the stairs to the deck and watched me as I chose logs from the woodpile underneath her. That’s by far my least favorite part of building a fire; I always inspect each piece carefully for spiders before I put it in the crook of my elbow. It’s probably too cold for them to be at the top of the pile, but as seeing black widow spiders was not unheard of in the house where I grew up, it’s my preference to be a choosy wood-carrier.

Building a fire is a skill that I learned as a child. We heated our house with a wood stove, and my formative winters were spent helping my parents keep the fire burning and the cold at bay. Now, when the snow is falling and I have nowhere to be, my first inclination is to get a fire going and then park myself in front of it with a book and a blanket. On this day, I brought two armfuls of wood upstairs and then searched the recycling for some newspaper or junk mail to burn. Then I grabbed some matches and plopped down in front of the fireplace.

From an occupational standpoint, building a fire is a fairly complex task, and it offers a lot of sensory input. You have to be able to tell which logs are dry, which ones have dangerous spiders on them, and then carry them safely to the fireplace without tripping over the dog. I know what kinds of materials are good for getting the blaze going, and which kinds are good for maintaining it. Arranging all of those materials in a way that lets enough oxygen in is a skill that takes practice, and you need to be able to look at your materials and imagine the best arrangement. This is a praxis-heavy task. Fortunately for my coziness goals, I’ve had plenty of practice. Building a fire is also a task that requires a lot of sensory discrimination; you have to use your eyes and ears to determine when and where it’s safe to put your hands near the flames. Even lighting a match is tricky if you can’t tell how much pressure to use. I remember being horrified as a kid, watching my dad place new logs in the fireplace, convinced he would catch on fire as he stuck his hand over the flames. Now, I know that he simply had a good sense of the heat and sparks.

I love sitting in front of a fire in winter. It feels cozy and warm, and it gives me the sense that there’s nowhere else I need to be. There’s the sound, the flickering light, the heat, and all the other parts of being inside by the fire, like hot chocolate and pajamas. Sitting in front of a fire evokes a feeling of security in me, even if I’m already safely indoors. Many people believe that the discovery of fire and how to control it marked an acceleration in human evolution because it offered a new abundance of calories and nutrients from more easily digestible, cooked foods. It may also have served to bring communities together, strengthening bonds and changing the dynamics of an already social genus. Perhaps my brain recognizes this ancient connection and knows that family is nearby and predators will stay away. At the very least, there’s gentle crackling and a nice, orange glow that puts me at ease. Plus, my domesticated canine, who also evolved around fires, likes to rip up the paper and small kindling while I’m getting it started, and that’s always fun to watch. She’s such a good helper. 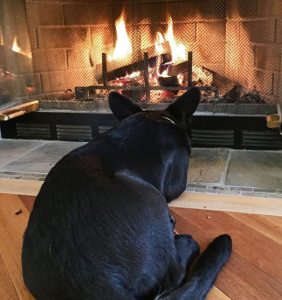