I’ve trained myself to be restrained whenever possible. I hold myself back when I don’t like something, and even my enthusiasm is tempered. People find me hard to read, and I don’t open up immediately, a little later, or even a bit after that. It takes a while.

Some of this is surely a product of my Sensory Processing Disorder. The world is abrasive to my nervous system; it’s loud, fast, bright, and unpredictable. So, to avoid standing out, I bury my reactions. I’ve developed excellent self-control. Of course, this has repercussions for me when I go home in a haze and need to do a lot of nothing for a while. Hiding how I feel about outside stimuli often protects me from two of the things I dislike the most: interrupting people and being the center of attention. Sometimes, enduring the feeling of people crowding around me is more bearable than attracting attention by elbowing my way to the door on legs that don’t feel like mine.

I have a fear of not being in control of myself. I find nearly every environment to be full of stimuli that are “too much” for me. Even my internal body sensations are problematic. My brain doesn’t always know exactly where in space my body is located or how things are moving around me. All of this feels very much out of my control, so I cling to my self-control for safety. However, I think my self-control has expanded past its allotted jurisdiction, and it’s time to address it.

My need to be in control of my reactions has seeped into my sense of what is my responsibility and what is not. It’s easy for us to think we’re responsible for others; we come to think that their feelings, their setbacks, and their decisions are on our shoulders. What any good friend would tell is you that you aren’t. You’re not responsible for how other people move through the world. We make our own choices, manage our own feelings, and deal with change on our own terms. 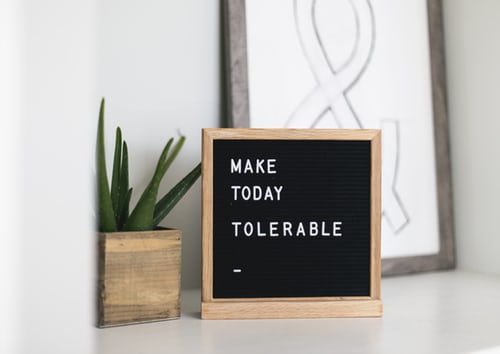 My particular misplaced sense of responsibility lies in how I think about my depression. I have always had a nagging (or roaring) sense that my depression is my fault. If I could just do more, or try harder, maybe I could fix myself. I’ve recently been faced with a treatment option that forces me to confront the fact that I have treatment-resistant depression, and that it’s not my fault. Seeing my severe depression as an illness that is out of my direct control is terrifying. It’s simply more comfortable for me to think that I’m just not doing a very good job at solving a problem that can be solved with enough effort.

And that’s how I realized that I’m a (self)-control freak.

I actually would rather believe that I’m a failure than that I drew the short mental health straw. At the same time, it’s freeing to view my depression as something that has happened to me rather than something I caused. It takes some of the burden off of me, but it also takes some of the control away from me. Brains are weird, and sometimes they have a mind (har har) of their own. Sudden relapses, triggers, and even seemingly spontaneous ends to episodes are not entirely understood. It’s scary to think that after all of this- the numerous medications, the hospitalization, the group therapy, the individual therapy, the occupational therapy– my brain has stubbornly remained depressed.

If I’m going to get better, I need to stop blaming myself. I need to accept that some things are out of my control and that I don’t need to hold myself entirely accountable for my symptoms. I’ve learned a lot about healthy coping mechanisms in my years of therapy, and although right now I feel too debilitated to put them into useful practice, I hope that a new approach might relieve my symptoms enough to let me begin to heal on my own, the way I like to do it: with hard work.

The term “control freak” has plenty of negative connotations, and it can be hurtful to people who struggle to trust others or to let go of perceptions about the “right” way to do something. This post is in no way a jab at others, only at myself. The title is meant to be humorous, to poke fun at a coping mechanism that holds me back. I’m a self-described self-control freak, and as the term does not bother me, I hope that it doesn’t come across as insensitive.