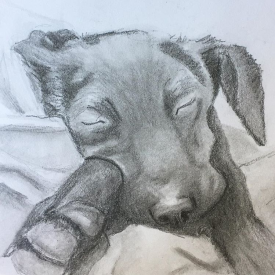 There’s nothing better than a cozy evening spent snuggled up with your dog or cat, right? Pets come with lots of responsibilities, but also with plenty of benefits for our health. I know how it weighs out for me- strongly positive. My dog has been an enormous help in my recovery from depression, and she also helps me regulate my nervous system when Sensory Processing Disorder gets in the way. But what does science say about pets and mental health?

I’m particularly interested in how pet ownership affects mental health and wellbeing, but perhaps it’s best to start with the research on therapeutic interventions. I’m guessing that it’s much easier to study the effects of human-animal interactions in the context of short visits than in the context of pet ownership for a few reasons.

Before I even read any articles, I was expecting to find that AAT is backed by a sizeable amount of evidence supporting the link between pets and mental health. After all, I’d seen those news stories about unconventional Emotional Support Animals, and those aren’t necessarily trained to perform a therapeutic role.

A 2017 review compiled data from 18 studies of AAT. In 15 of those studies, at least one positive effect was found, although the authors point out that most of the studies found no significant effect on treatment outcome. Overall, the review suggests that AAT, particularly dog assisted therapy, provides mild to moderate effects. Not bad, given how many variables are unavoidable when it comes to animal interactions.

Therapy dogs have been successfully used as part of treatments for elderly Alzheimer’s patients as well as in promoting social interactions in a long-stay psychiatric population.

So, if AAT is mildly or moderately effective in short “doses”, how does near-constant interaction with animals affect us? I’m wary of extrapolating too far because pet ownership is certainly not just a scaling-up of petting a therapy dog at your university’s library during finals. There’s a lot more to it; perhaps the responsibility, stress and frustration when a pet misbehaves, and of course, the emotional pain of losing a beloved companion outweigh the benefits of interacting with animals.

My Roommate is a Quadruped

Did y’all see that Reddit thread about how weird it would sound if we called our pets “roommates”?

My roommate ate every Lactaid pill out of my mother’s purse and left all the wrappers on the floor. The other day, I walked into the kitchen to find my roommate standing on the table, eating jam right out of the jar. I know someone whose roommate ate crayons and then pooped rainbows for a week.

Pet owners share their lives with their pets; not just their time and energy, but their homes, too. Many people consider their pet as part of their family, and I can see why (and not just because I’m one of those people). Anecdotally, I can understand why pets and mental health benefits are often linked in our minds.

A qualitative study of people with mental health conditions, conducted in 2016, had participants map out their social support networks in three concentric circles, the innermost circle being the most important. 25 of the 54 participants were pet owners, and the majority of them placed their pets in the innermost circle. The researchers identified several common ways in which participants reported benefits from owning pets.

Another study with a similar design had me grinning from ear to ear- some of the transcripts of participants talking about their pets are delightful. Although this study focused more on chronic physical illnesses, I noticed some relevant parallels. The authors describe the apparent infantilization of pets and hypothesize that it provides a sense of reciprocity that chronic illness sufferers may not have in their human relationships. Those with chronic illness- physical or mental- often report feeling like a burden on others. Doting on a pet, it seems, alleviates some of those feelings and makes the pet owner feel needed.

Everyone feels distressed from time to time. Petting an animal can help calm someone in distress by reducing blood pressure and reactions to mental stress. One study, hilariously called “Friends with Benefits: On the Positive Consequences of Pet Ownership,” experimentally found that pets were able to keep their owners from dwelling on negativity caused by social rejection.

For people with Sensory Processing Disorder, pets can provide a myriad of soothing sensory benefits. They offer tactile feedback in the form of fur, feathers, wool, etc., and the extra snuggly ones can provide deep pressure (depending on how heavy they are). Indirectly, pets provide proprioceptive and vestibular input simply by requiring interaction- walking, feeding, bathing, and training them. Pets tend to have less complex, more predictable social cues, which may make them less stressful to interact with than humans, especially for people who are easily overwhelmed.

Some of the Drawbacks

On the other hand, pets are their own entities with their own agendas. They don’t always do what we want them to. For instance, my dog barking at me while I try to drink my coffee in the morning is definitely NOT soothing. There are distinct disadvantages to owning a pet when you’re affected by SPD and/or mental illness. They can be messy and loud (unless you like those things- then add that to the advantages list), and sometimes they get in your personal space when you don’t want to be touched.

The Intersection of Pets and Mental Health for Me

Despite the frustrations and occasional discomfort, I’ve found pet ownership to be immensely helpful and rewarding. My dog reminds me to get outside and walk, to look up from my computer every once in a while (she’s being quiet…too quiet), and to enjoy all the little pleasures- long naps, eating with gusto, and rolling in smelly things.

Wait- not that last one. Don’t do that.

One thought on “Creature Comforts: Pets and Mental Health”