May is Mental Health Awareness Month, and Mental Health America has several initiatives to spread awareness during May. One of these is #mentalillnessfeelslike. Peruse different categories on their website, where MHA has compiled Instagram posts from people participating in the hashtag. It’s always comforting to find validation in others’ experiences.

The hashtag got me thinking about my own attempts to represent what mental illness feels like to me. This blog is mostly writings that describe my experiences with depression, anxiety, and their various treatments. So, for something different and a trip down memory lane, I thought I would take a jaunt through some of the art I’ve made on the topic of mental health/illness.

The following slideshow was my attempt to depict a strange sensation brought on by an antidepressant I no longer take. It left me feeling “better”, but in an artificial way, as if I could feel my depression just outside the boundaries of myself. It was sort of like being squeezed into a neutral mood that didn’t fit.

And then we have The Potato Scale of Depression, born when I responded to “how are you” with “everything is mashed potatoes”. What I meant by that was that the world was dull, my senses felt mushy, and seeing past any of it felt impossible. The beauty of the potato scale is that it opens the door to describing your mood in a creative, silly way, while still communicating a serious topic. And, you get to have eye-opening conversations about how you and your conversation partner rank various types of fries. Of course, this is an abridged version of the scale; there’s a whole world of poorly-prepared potato dishes to choose from. (Soggy latkes, undercooked gnocci, etc.)

Clearly, analogies are my favorite way to say how I feel. This next one is a good reminder for present me.

The rest are simply some depictions of what mental illness feels like to me. 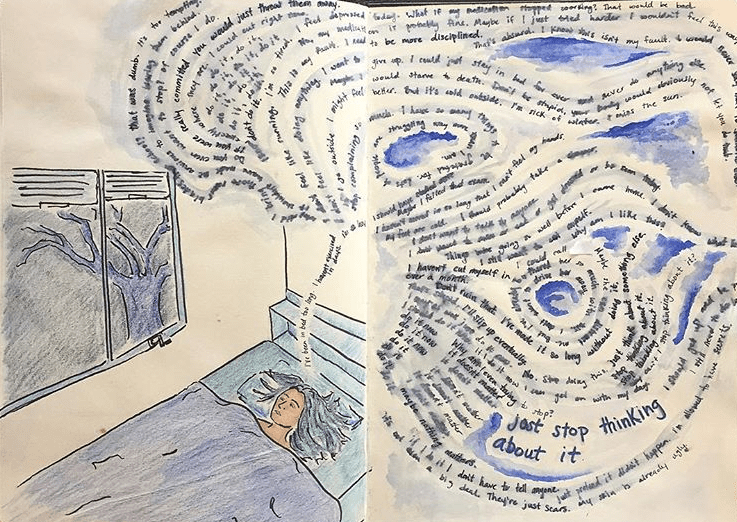 Over the years, I’ve made deliberate efforts to reduce my perfectionism surrounding my artwork. I think I’ve made some good progress. When I’m in the groove of regular artwork production, I can sit down with a blank page and some materials and just… start. With minimal agonizing, I can just start to put lines or colors on the page and see where it goes. But, when I stop making art for a while, the barrier of perfectionism returns. It always leaves me overthinking and judging myself harshly for my attempts to get started again. I haven’t been making anything in the last couple of months, and it took me some serious intention to pull out my watercolors and paint this. 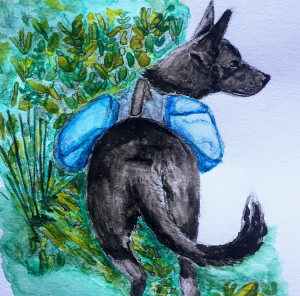 Rationally, I know that it doesn’t matter if I make something and rip it up, or if I make something and let people see it even if I’m not proud of it. But the perfectionist in me thinks I need to have a piece planned out and executed perfectly. I do think that there is some value in this trait. It can give you the patience to get something “just right,” or to sketch your concept with different angles or color schemes and figure out what you like the best. But then again, art never turns out exactly how you imagine it, and there’s rarely a point where you know for sure that it’s done. While perfectionism can help you get closer to your mental vision, it can also keep you from getting started at all– and that’s paralyzing.

In my experience, perfectionism and creative block go hand in hand. You can’t figure out what to make because none of your ideas are good enough; your attempts don’t look like you imagined them, so you scrap the whole thing; the longer you go without making something you like, the higher your expectations and the harder it is to get started. My approach to getting through this is to pick something that I like looking at and just start drawing/painting it. I don’t try to come up with a completely original idea yet- just pick a reference and get started. Sometimes this is enough to jumpstart my inspiration, and at the very least, it usually gets me excited about creating more things– whether from imagination or reference.

That painting I showed earlier– I don’t like it much. It’s based on a photo of Stella that I absolutely love, and my painting doesn’t come close to giving me that feeling. So, I don’t like it much, but I like that I made it. I like the feeling of seeing something coming together, even if it doesn’t match my expectations. I’ve been trying for weeks to get over the funk of creative block, and I think this painting may have helped.

Fighting perfectionism takes practice, and for me, it seems to take deliberate consistency. Letting my practice collect dust makes it harder to pick back up later. But no matter how long it’s been, I know that the more willing I am to make mistakes and to take risks, the more satisfied I am with the results.

As a bonus, here’s my attempt at depicting the fish wedding from one of my ketamine infusions (part 8). It looked pretty much like this:

Two weeks ago, while trapped in the ill-fitting, damp denim jacket of depression, I slipped into the airy expanse of the Denver Art Museum. We were there to see a once-in-a-lifetime exhibit that is visiting nowhere else in the U.S. besides Denver. It’s called Claude Monet: The Truth of Nature. While an art exhibit is not enough to cure my mental malaise, it certainly helped.

Monet’s art is just up my alley: nuanced, filled with light, and nature-focused. I could not choose a favorite if I tried. To some extent, each room was dedicated to a particular time period in Monet’s life. There were some parts that compared paintings of the same subject done at different times, but for the most part, the chronological organization helped show the progression of his style from something close to realism into distinctive impressionism. We saw the poplar trees, the haystacks, the waterlilies, and so much more. We saw the ice of the frozen Seine and the roses of his beloved garden. We saw the paintings up close, inspecting the details and sudden colors, and we saw them from far away, brushstrokes blending into a strikingly clear image. 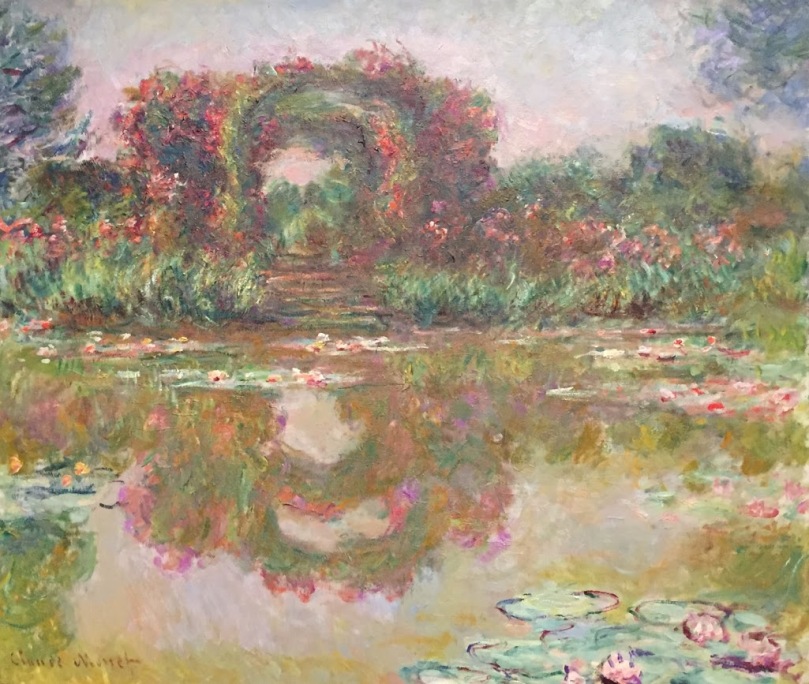 I was particularly taken with his ability to render water and reflections. At mid-distance, there is an overwhelming illusion of depth in the water he painted. It’s like you could just dive right in. Upon closer inspection, I marveled at the sheer number of colors and shades he used to achieve that effect, and the shapes that brought the water together. From a distance, I lost sight of the intricacies but was captivated by the image as a whole.

Monet was driven by a desire to capture specific moments in time, and to represent them as true to nature’s beauty as possible. Part of that beauty is how it looks, but part of it is how being in nature makes you feel. Monet’s art is about how afternoon light is different from morning light, and how the same scene makes you feel at different times. It’s about atmosphere: how ripples in water convey emotion, how cliff faces can be sinister, and how perspective changes everything. 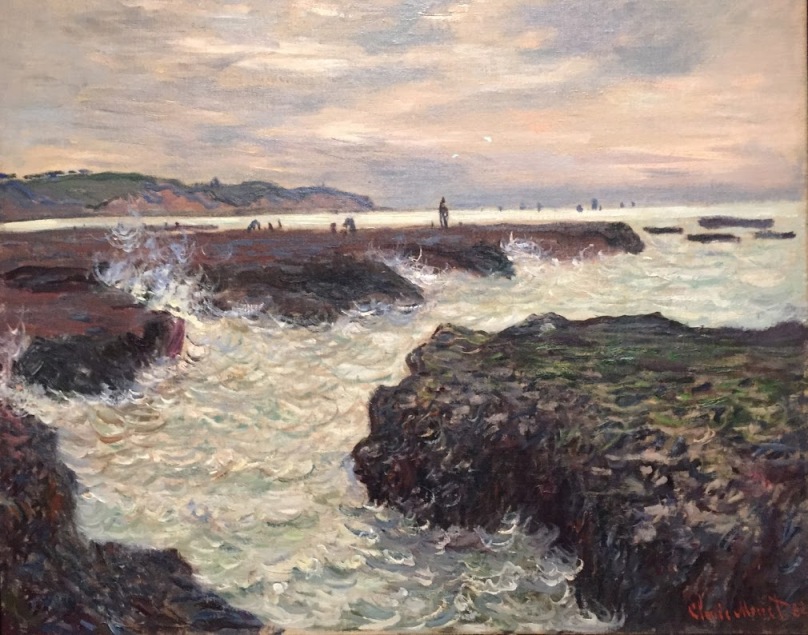 While in the exhibit, I overheard a mother and her young daughter discussing a painting. The daughter asked if there was glass covering it, to which her mother replied “No,” there wasn’t.

“Then why is it shining?”

It was tiring but well worth it. I’m thankful that I got to immerse myself in this exhibit, and that my brain allowed me to enjoy Monet’s shining paintings.

I’ve loved making art for as long as I can remember. I used to draw the same picture of a dog on different pieces of paper and leave them scattered around the house as a not-so-subtle hint to my parents that their 5-year-old really wanted a puppy. I like to draw images that I want to remember; memories of pleasant things and places. But I also use art as an expression of mental health.

Feelings are hard to articulate, but colors, shapes, and textures can carry meaning without the structural constraints of sentences. Creating an image can be a cathartic way to express feelings that also lets other people in on the experience. When I don’t know exactly what to make but I have an urge to make something, I start with choosing materials and just let my hand move freely. Something usually takes shape, but even if it doesn’t, I can always just scrap it and start over.

Part of what I love about art as a way to express mental health is that everyone can interpret it in their own way. As the artist, there’s something that it means to you, but you don’t even have to share that meaning with the people who see your art. And even if you do share it, people will still have an immediate reaction based on their own life circumstances and interpretation style.

The therapist I saw in college believed that there were no accidents in art, and would analyze my sketchbook while sitting next to me. While I’m sure there are some elements of my art that come from my subconscious, I don’t usually see the “accidental” parts of my art as meaningful.

That said, there were always parts of my art that my therapist pointed out as meaningful that I hadn’t noticed before. I could always come away with a better understanding of myself, or at least something new to think about. For example, the window mechanism in this piece is very detailed.

She suggested that detail might be an indicator that there was some hope of freedom or escape from the thoughts in the drawing. Whether that’s something that ended up in the drawing because some part of me believed there was hope, I’m not sure. But I can certainly take that sense of hope away from it, into my normal life.

Art about mental health is not just an excellent way to express feelings, but it also starts a conversation. It can make people feel less alone in their experience, and it can help your loved ones understand your symptoms and how you feel. Sometimes, it even helps me understand where I’m at in regards to my own outlook. Sometimes a piece of art will take me by surprise at its dark overtones when I thought I was feeling ok. Other times, I’m pleasantly surprised to find that drawing a whimsical picture is exactly what I want to do.